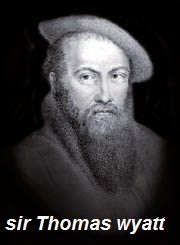 This poem operates within a Petrarchan framework as the poet uses the typical image of love as a frustrating experience doomed to fail, the image that was originally used by Petrarch. This poem deals with love as a frustrating,yet inspiring experience gathering both hope and despair, possibility and frustration.  It presents the balance of powerful opposites: forces within or outside the lover which move him on or hold him back.

The poem opens with the poet presenting himself as a shipwrecked or tossed,lost ship; hence love is presented as a journey that to be achieved or be drowned in this sea and waves of forgetfulness and denial of his beloved "my lord " since she changed her attitudes towards the lover. Every change in attitude of the beloved is like a rock standing in front of the ship,lover, as if every change causes oars of the ship to take the wrong direction heading to a death-in-life state to the poet. As the beloved continues her denial "steereth with cruelness ", the lover is in a state where he cannot live life, since she rejected him, at the same time he is not dead as death ,at this case, is salvation of suffering and misery of life since the beloved rejected the lover.

At that case, the ship, poet, is lost in the sea of forgetfulness,cruelty and denial. The ship is lost, unable to find port;that's to say that Love cannot be achieved because of the beloved herself making the lover shed tears"A rain of tears"  as he can no more see her eyes "The stars be hid " leading him to his pain. Finally, the poet states that he have two painful destines to choose one of them: the first is to forget memories of love and live life-in-death or to keep his suffering and pain by keeping and sticking to his the memories of his lost love. He chooses to maintain his love in spite of pain saying that his reason, mind, is absent or drowned that he chose to suffer while he could have forgotten and let it go!

This poem consists of  3 quatrains and a final closing couplet. It's a Petrarchan sonnet with little modification;it's written in Iambic Pentameter. The Rhyme Scheme of this sonnet is : abba abba cddc ee.

There's also a number of figures of speech such as :  "My galley": a metaphor as the poet compares or likens himself,his love to a ship trying to continue its hard way between rocks in order to show us his suffering and his insistence on keeping his love.  "The stars be hid": a metaphor as the poet compares the eyes of his beloved and their beauty to stars that are hidden and not seen anymore; also it's a metonymy of the beauty of the eyes of the beloved. Also, there's a simile in line 6 expressing moments of despair to which the poet is subjected. The puns in lines 3 and 4 enrich the meaning and reflect the real situation of lover.;so, both puns are to be understood in the light of the relationship between Thomas Wyatt and Anne Bolyne. There's a personification in line 10 "weared cords" as the poet likens the cords of his heard to a weird person, another personification in 13 "Drownèd is Reason " as the poet likens his mind that insists on keeping his love to a drowned person or absent-minded person. Finally, Images appealing to different sensory perceptions are effectively employed.

Email ThisBlogThis!Share to TwitterShare to FacebookShare to Pinterest
Labels: Poetry