The Old English language, also called Anglo-Saxon, was the earliest form of English. It is difﬁcult to give exact dates for the rise and development of a language, because it does not change suddenly; but perhaps it is true to say that Old English was spoken from about A.D. 600 to about 1100. The greatest Old English poem is Beowulf, which belongs to the seventh century. 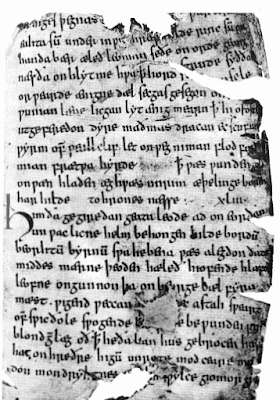 It is a story of about 3,000 lines, and it is the ﬁrst English epic. ー The name of its author is unknown. Beowulf is not about England, but about Hrothgar, King of the Danes, and about a brave young man, Beowulf, from southern Sweden, who goes to help him. Hrothgar is in trouble. His great hall, called Heorot, is visited at night by a terrible creature, Grendel, which lives in a lake and comes to kill and eat Hrothgar’s men. One night Beowulf waits secretly for this thing, attacks it, and in a ﬁerce ﬁght pulls its arm off. It manages to reach the lake again, but dies there. Then its mother comes to the hall in search of revenge, and the attacks begin again. Beowulf follows her to the bottom of the lake and kills her there. In later days Beowulf, now king of his people, has to defend his country against a ﬁre—breathing creature. He kills the animal but is badly wounded in the ﬁght, and dies. The poem ends with a sorrowful description of Beowulfs funeral ﬁre. Here are a few lines of it, put into modern letters:

epic, the story in poetry of the adventures of а brave man (or men)

The sorrowing soldiers then laid the glorious prince, their dear lord,

in the middle. Then on the hill the war-men began to light the

greatest of funeral ﬁres. The wood—smoke rose black above the

The old language cannot be read now except by those who have made a special study of it. Among the critics who cannot read Old English there are some who are unkind to the poem, but Beowulf has its own value. It gives us an interesting picture of life in those old days. It tells us of ﬁerce ﬁghts and brave deeds, of the speeches of the leader and the sufferings of his men. It describes their life in the hall, the terrible creatures that they had to ﬁght, and their ships and travels. They had a hard life on land and sea. They did not enjoy it much, but they bore it well.

ª angel, a servant of God in Heaven. According to old accounts, Satan and other angels disobeyed God and became the Devil and the Devil’s servants in Hell.

~ hell, the place for punishment for evil.

ª Apostle, one of the twelve men chosen by Christ to preach to others.

The better poems is The Dream of the Rood (the rood is Christ’s cross.) This is among the best of all Old English poems. Old English lyrics include Deor’s Complaint, The Husband’s Message, The Wanderer and The Wife’s Complaint. Deor is a singer who has lost his lord’s favour. So he complains, but tries to comfort himself by remembering other sorrows of the world. Of each one he says ‘That passed over; this may do so also.’ There are many other poems in Old English. One of the better ones is a late poem called The Battle of Maldon. This battle was fought against the Danes in 991 and probably the poem was written soon after that. It has been highly praised for the words of courage which the leader uses:

courage must be the greater, as our strength grows less. Here lies

our lord all out to pieces, the good man on the ground. If anyone

thinks now to turn away from this war-play, may he be unhappy for ever after.

In general it is fairly safe to say that Old English prose8 came later than Old English verse; but there was some early prose. The oldest Laws were written at the beginning of the seventh century. Some of these are interesting. If you split a man’s ear, you had to pay 30 shillings. These Laws were not literature, and better sentences were written towards the end of the seventh century. The most interesting piece of prose is the Anglo-Saxon Chronicle, an early history of the country. There are, in fact, several chronicles, belonging to different cities. No doubt KING ALFRED (849-901) had a great inﬂuence on this work. He probably brought the different writings into some kind of order. He also translated a number of lyric, a poem, originally one meant to be sung ー which expresses the poet’s thoughts and feelings.

ª prose, the ordinary written language, not specially controlled like verse

Latin books into Old English, so that his people could read them. He brought back learning to England and improved the education of his people. Another important writer of prose was AELFRIC. His works, such as the Homilies (990-4) and Lives of Saints10 (993—6), were mostly religious. He wrote out in Old English the meaning of the ﬁrst seven books of the Bible. His prose style11 is the best in Old English, and he uses alliteration to join his sentences together.